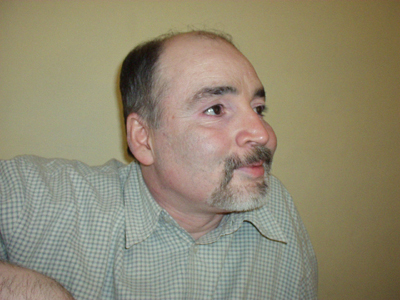 Sandeep Johari was born on the 7th of April 1964 in the town of Bareilly - India. Colors have been a part of Sandeep Johari’s life ever since he was 4 years old. His family considered him to be gifted by God. The intricate work on the paintings of Gods drew him like moth to fire.

Sandeep johari created a first illustrated storybook for children called "Hanuman's Journey to the Medicine Mountain". A second, on the figure of Karna, will come out end of 2007.

Harish Johari noticed him when he was almost 12 years of age. As he himself did not have too much time due to frequent trips abroad, he took Sandeep to a man he considered to be his own teacher – Master Chandra Bal. Under his tutelage Sandeep learnt to appreciate the hard work and discipline behind every piece of art. After 12 years of being guided by his teacher and imbibing Harish Johari’s influence, Sandeep started actualizing his own ideas.

Some years were spent in active pursuance of a career in advertising before he was again drawn to the brush. This time he started on an ambitious series – the Hanuman series. This was followed by another interesting concept quite different from his usual style – the cleaning of brushes (see image on the left). Sandeep continues to work on the Hanuman series as well as on individual paintings of the Hindu Gods.

According to Sandeep he owes a lot to Harish Johari who often used him as his punching bag. He feels that treatment got his back up and made him prove himself in advertising as well as painting. Once he was sure he had driven all complacence out of Sandeep just a few days before his death, Harish Johari told Sandeep that he was a true follower. Committed to Harish Johari’s tradition, Sandeep wants to challenge his own boundaries and do something new all the time.